We love receiving great case studies from you! This is one of the most interesting cases we’ve ever had and we were very excited while reading it with our team.

In this case study Jose Luis Zurdo explains how Serial to Ethernet Connector made his teenage dream come true. Keep on reading, you will enjoy it!

Jose Luis Zurdo is an engineer working as Technical Director in a small factory near Madrid. He worked many years in automotive industry designing ignition systems and finally in the civil work site designing. Nowadays, near to be retired, he is focused on hobbies as drawing and flying light aircrafts just for fun.

Alex Taylor: What challenges made you search for the software of this kind?

Jose Luis Zurdo: I am an engineer approaching retirement age and it has been my dream from being a teenager to become a private pilot. As I cannot afford to fly every week or to buy my own light plane, I decided to use Federal Aviation Administration approved Flight Simulator to be trained in every situation however I find. Simulator software has its own cartography and is not accurate or detailed enough to allow Visual Flight to be as real as it could be.

I use also GPS software with scanned Aeronautical Maps to make my Operational Flight Plan before flying. Sometimes I try to fly over areas I do not know very well, then I tried to receive in GPS software via COM port the NMEA code from Simulator software, from one PC to another, to simulate flying over detailed cartography before boarding on to the real aircraft. Trying to communicate both COM ports through Ethernet I thought but… my goal is to be trained with the flying software not suffering connecting machines! Just look for a software which gives me the freedom to focus on my target!

Alex Taylor: How did you get to know about Serial to Ethernet Connector by Electronic Team, Inc.?

Jose Luis Zurdo: I searched through Internet for software to communicate both PC COM ports through Ethernet and downloaded a handful of them. After trying for a few weeks cheaper software and sometimes not running as announced, I got very disappointed and I began a search for better software. I found Electronic Team, Inc. Serial to Ethernet Connector and once more installed the trial version, not very confident to succeed. After an easy configuration as default in both PCs, I turned on GPS software and simulator once again and… Great! I could not believe watching how NMEA code flowed in the window and moving map started to follow my flight. It worked as easy as promised! 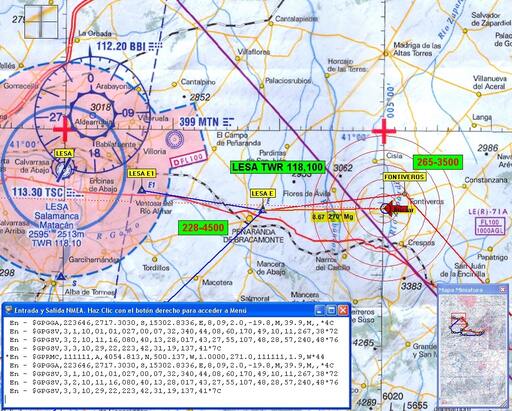 Alex Taylor: Did you try other products for the same task before choosing Electronic Team, Inc. solution? Why did you prefer our product?

Jose Luis Zurdo: Yes, no less than four products. I was always in troubles to connect both PC COM ports. I did not spent more than one hour to try each one or searching the reason why not working properly, just uninstalled and tried next, until I installed Electronic Team, Inc. SW and started to run after ten minutes. It was very easy to configure even for someone who knows nearly nothing connecting machines.

Alex Taylor: Please, describe how you are using our product now.

Jose Luis Zurdo: Now I can focus on getting accurate and detailed cartography from anywhere in the world I would like to fly over, study the flight charts and make my flight plan with GPS software. Then select in the simulator the aerodrome in same geographical area. As a miracle, simply both PCs talk to each other quietly and GPS reads NMEA code in client software sent from Simulator in other PC and screen starts to move the map pointing exactly where my aircraft is. This way I can take off from any aerodrome in the world and fly having a GPS screen showing accurate geographical and flight data as real as it gets!

Alex Taylor: How did you benefit from using Electronic Team, Inc. solution?

Jose Luis Zurdo: Thanks to Electronic Team, Inc. I forgot about serial to ethernet connection problems. But I remember the name of the piece of software which made possible my goal: just being trained at home!